Ethiopian Shoe Store Lays Off Employees from the United States

Ethiopian Shoe Store Lays Off Employees from the United States;

A 30 year old famous shoe store in Nazareth Ethiopia, Mekuria Chama Bet,  announced last week that it was laying off 30 of its 40 employees due to economic hard times and most of the laid off employees will be Ethiopians who are recent arrivals from the United States.   The owner, Ato Melkamu Geremew told CHEWATA that telling the employees that they no longer had jobs at the shoe store was ‘very painfu’ but, he added, ‘Men larg? Keserku eko!!’.

Most of the laid off employees arrived in Ethiopia over the last two years from the United States, where they were laid off from their various jobs.  “I lost 5 jobs in 4 months while I was living in Washington DC last year and could not afford to buy enjera from our local habesha store there.  So I decided to go back home and give it a try.  I was happy to find a job at this shoe store in Nazareth for whatever they paid me.  And now, I am jobless again!!”, said a depressed employee Ashenafi Demeke.  Another laid-off employee, Koki Yared, said that she knew that something was up at the store when the owner showed up one day at her desk and told her ‘a long long vacation is coming and what plans do you have?’.  The owner later denied making that remark.   Most of the fired employees were gathered at a job fair in Nazareth for a newly opened business called Yilma Siga Bet. Among the requirements for this new job, however, is the need to have experience in the meat cutting field and being resident of Kera for atleast 3 years.  One employee who was grimly looking at his application said, “Kera zemede bet 2 amet new yenorkut. Yeketrugn yehon?”.  Another employee was smiling when he said, “Tewoleje yadekut kera new.  I have a 10 year experience of beg arajinet in the city where I used to live, Houston Texas!”

“Hey I will do anything to make a living,” said Moges Aschalew, who lost his job in Philadelphia in 2008 where he was working as a computer programmer.  “Ever since the U.S. economy started to slow down, I have been fired from 3 different jobs, have been evicted from two apartments, and have lost two girlfriends.  And believe you me, we are not the only habeshas from America coming to Ethiopia looking for jobs.  Thousands will be coming here soon and it is going to be a fight to the end to get the jobs here. Life sucks man!”.

Ethiopia’s labor affairs commissioner Weizero Genet Taneku, reached by CHEWATA in her office in Addis Ababa, sympathized with the laid off people and said that her office will do everything possible to find employment opportunities for them as soon as possible.   “I especially feel for these people because they used to live in America where jobs were plentiful.  We are currently negotiating with a cotton factory owner in Humera who is seeking employees to work in the field 13-14 hour shifts of hard labor.  May be we can send them there!”  Told about the commissioner’s plan to send them to Humera for work, one of Mekuria Chama Bet’s employees, Tebebe Difabachew angrily replied, “Humera kemehed Americaye temelishe denech benegid yeshalegnal!!” 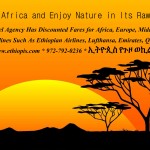