“I ain’t mowing jack on my body! Show me the money” (Mr. Adhani Melaked)

According to the petitioner’s lawyer, “ever since these two Afghanis arrived in America and got this lawn mowing job, their employers have subjected them to countless abuses, including referring to Mr Melaked as ‘Bin Melaked’ and his wife, as the ‘invisible peep hole lady’ in numerous conversations.  Mr Melaked, reached by phone at his apartment in Fairfax, VA, told CHEWATA in a broken English and with a smile, “They have abused me. Abused my wife, and have asked me so many times to ‘mow my beard as soon as I got done with the yard!’ I will not shave jack for these people because I am an Afghani and Afghanistan is beard. In fact, they have made me so angry that I am going to grow more hair in more places of my body.  The armpit hair  is growing, the beard is growing, chest hair is coming along, my legs are virtually imprisoned by hair, and you know my **** is virtually in a thick forest!  I am going to have so much hair to piss these people off that when I walk in to that court house next month, I am going to look like a two legged male lion”.

The employer refused to discuss the upcoming lawsuit with CHEWATA but faxed a one line response to CHEWATA which said,

“We could no longer differntiate between the weeds on our lawn, our hairly little dog, and the thick beard on Mr. Melaked and our baby has had nightmares of Mr. Melaked dancing the Russian tango on her bed for several nights.  One night our little hairy dog Puppy was lost and we found her playing inside Mr. Malaked’s beard while he was napping on our sofa and she probably thought that with that much hair, Mr Malaked was her mother! This is America.  Either he shaves, and his wife show us her face, and stop scaring our child, or no lawn mowing job! Thank you.”

Mr. Melaked’s attorney Ato Damte responded, “Mr.Melaked was wrongly fired.  Just because you resemble Bin Laden or you are wearing the same type of long dress like him, doesn’t disqualify you from a job.  Last time I looked, this was America, the land of freedom. We are taking this to the district court and we look forward to winning this case.”  Mr Melaked’s wife refused to appear for this interview and said, she ” is 100% behind my husband!”

Ato Damte has found Mr Melaked a new job while the lawsuit is going and currently Mr. Melaked works as a sales man in the men’s beauty department at an undisclosed Washington D.C. store which specializes in men perfumes, colognes, shaving equipment, and other men’s beauty accessories.  Ato Damte admits that even at the new job, “selling shaving accessories is not the strongest suit Mr Malaked got going right now.”  Ato Damte said that he plans to collect a humanitarian fund for Mr. Melaked and his wife at the upcoming Ethiopian soccer tournament in Houston, Texas.  “The least we can do for these poor immigrants is to show them that there is indeed hope, ” he told CHEWATA. 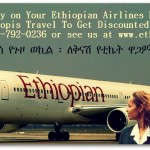